If you're not familiar with the ReViz project I encourage you to check out the page and see the work that's been done so far.

Matt recently kicked off a new ReViz by taking the Torndao dataset used in the 2012 Iron Viz contest,  which was won by Anya A'Hearn and finding a new story which showed the five deadliest single days of Tornado outbreaks recorded in the USA.

When I got a hold of the data, I have to be honest I found it really hard to come up with another engaging story within the dataset that hadn't yet been covered. So instead I've created something that I hope is more of a striking visual. Taking inspiration from the famous US wind map (see below) I wanted to show visually the volume and power of the tornados and how they are clustered around specific parts of the country. 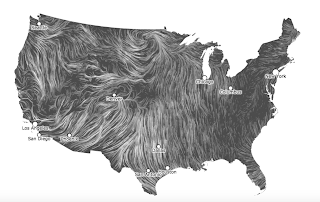 I also wanted to show both just how common tornadoes are but also the degree to which fatalities from tornadoes come from a small number of very big instances. I also included some light interaction to let people zoom into their state, or to look at how things change over time.

Unfortunately the resulting map is pretty slow to load, and so to mitigate that a bit I only included the most recent 10 years of data. The result is below: