Sunshine on my Shoulders

I don't know about you, but I'm already bored of this autumnal verging on wintery weather. As I was walking home from work tonight (in the dark and cold), feeling pretty glum and a bit SAD I thought "I know what would cheer me up, some sunshine and a nice viz". And so I've finally gone ahead and made the more up beat counterpart to my rain viz.


A couple of notes:
- Sunshine hours are not the same as daylight hours, they are also affected by cloud cover, rain etc... see this explanation
- When publishing this viz, I overwrote my original rain viz on Tableau Public by mistake by doing 'Save to Tableau Public' and not 'Save as to Tableau Public'. Be careful! If you are working from a previously published workbook, as I was here, then saving to Tableau Public will overwrite with no warning! I've lost that lovely counter which showed it had over 20,000 views..... :-(
Posted by PeterG at 22:18 4 comments:

Email ThisBlogThis!Share to TwitterShare to FacebookShare to Pinterest
Labels: tableau, tableau public, viz of the day

Remember that rain viz? Well here it is again, only this time with extra bonus feature animation. Click the green button once to start and once to stop.

Want to know how its made? Then look here

So today is recovery day - recovery from the epic week in Vegas that was Tableau Conference 2015. For various reasons this was probably my favourite conference yet, which is saying something, so I thought I'd use this sofa day to get some thoughts down before I forget (I did this in 2013 too, but forgot last year). Ok here goes.....

1. Tableau has gotten to be freaking huge!
Do you know how big the MGM Grand is? Its really really big. And Tableau is now a big enough company, with a big enough community to fill it with no problem. The first US Tableau Conference I went to was San Diego in 2012 - it was awesome and I thought at the time it was a very big event. Looking back it seems teeny tiny.

I was an early-ish adopter of Tableau, not one of the true renegades but I got into it in 2010 around version 5.2. Back then every time I talked about Tableau with someone, they had never heard of it and I got to introduce them to it. Between then and now Tableau has gone (sort of) mainstream and is a publicly listed company. Now I over hear people talking about Tableau on the street, in coffee shops and on the subway (seriously, these three things have happened). I also met someone at a meet-up who said he was looking for alternatives to traditional BI tools like Tableau - oh how times have changed!

Three really important things haven't changed about Tableau and the conference though, despite the increase in scale:
i) The excitement among the attendees and the community is genuine - hearing people scream and applaud the announcement of new features like 'viz within tooltip' warms my nerdy heart.
ii) The company still cares - I got to meet many people from the Dev team and they really want to hear customer feedback and find ways to make things even better
iii) I still get to hang out with some of my best friends in the world, and from all over the world, in one place for a short but magical week. 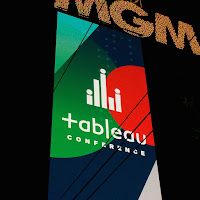 2. My thoughts on new features
Devs on stage, introducing new features during the opening keynote was one the highlights of the conference, as really it should be. All the devs did an amazing job presenting, half of them could quit Tableau for a career in stand-up comedy if they wanted. Anyway, features that caught my eye included: 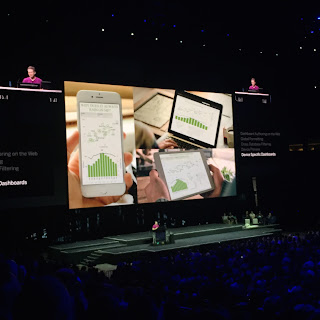 Device specific dashboards being presented - recognise the viz? More on that later :-)

Some things I would have liked to have seen but didn't:

3. Shine Pulikathara rocked it at Iron Viz
The fact that some people go to the Tableau Conference but don't go to see Iron Viz baffles me. Its the GUARANTEED BEST SESSION every year. This year's data set (GDELT) looked really difficult to work with but each contestant pulled something out. My Slalom colleague Matt Chambers (more on Matt later) came up with some really clever calculations around media bias - but ran into some trouble making them work in the 20 minutes. And Skyler's viz was wonderfully colorful. But there was no dispute about the winner. I mean check this thing out, 20 minutes??! 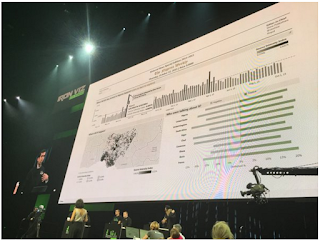 And there were some lovely finishing touches like this: 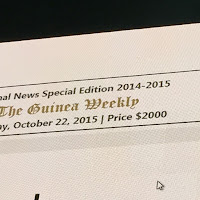 Shine did a great job presenting what is really a wonderful viz in terms of both design and storytelling. The black and white newspaper theme reminded me of my own newspaper themed viz I did a few years ago, which now looks a bit amateur in comparison! You can also see Shine's work on Tableau Public here, note that Shine didn't have to worry about font compatibility. I've been a fan of Shine's work since he started posting this year - I think this kid is going places.

And as for next year's Iron Viz, maybe I'll give entering it one last shot....

4. I work with some really great people

Slalom were out in force at this conference, there were something like 50 of us there and I got to meet colleagues from around the country. I also got to present with Nelson Davis and John Mathis on the Ebola project we've been working on for the Tableau Foundation. John and Nelson have poured serious amounts of effort into this project and I was so happy to be able to present it with them. 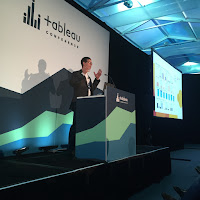 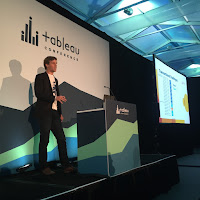 Also a big shout out to my great boss from the New York office Jim Gurney and my NY colleague Steven Carter who have both been incredibly supportive to me (pic below of us at the keynote). And thanks to James Young and Allan Walker for organising a killer party for the Zen Masters and Tableau Devs, what a view! 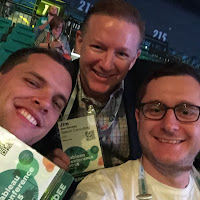 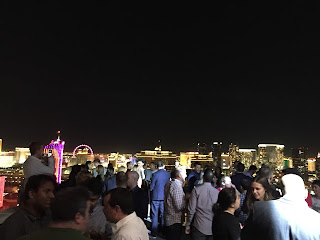 5. Seeing the impact of last years blogging session
At the 2014 conference in Seattle, Jewel Loree organised a panel on Tableau blogging with both myself and Andy Kriebel. The session was REALLY well attended and was a lot of fun, you can still watch it here. Well after that, tweets started pouring in from people who attended and had set up their own blog because of it. Fast forward a year, and one of those people who was inspired to start a blog is an Iron Viz contestant and is featured on this years blogging panel. Oh and I'm pleased to say he's now a colleague of mine too - that's Matt Chambers.

Another person who attended that panel session in 2014 was Chris Jones. Chris introduced himself to me at the conference and I was really inspired by his journey with Tableau in the last year - he's even been teaching it to kids at his son's school. Check out this presentation he gave to them, the bit about teaching dimensions, measures, continuous and discrete with a dog is pure genius. 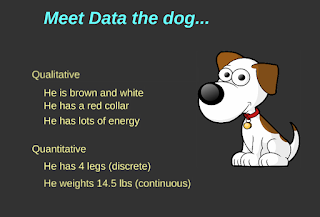 I'd love to hear the 'one year on' stories from other people who attended that session.


6. Personal highlights
Ok now its time to show off and brag for a second. But did you see my rain viz on that really big screen being used to demo new features to 11,000 people in a fricking arena?!?! Man that felt good. Shame they took away the clouds though. Compare and contrast with the original below. 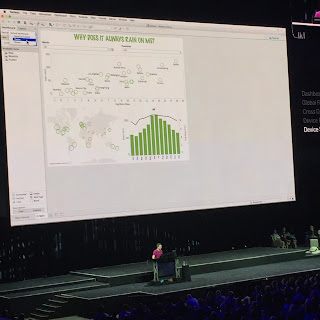 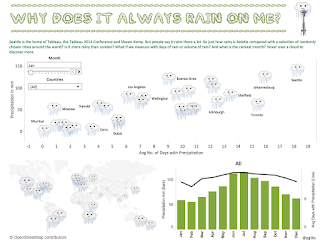 Other highlights included the Zen Master presentation, being a Tableau Doctor for an hour, Paul Chapman's EasyJet talk, the New York New York roller coaster, Neil DeGrasse Tyson happy hour, meeting up with Slalom clients, receiving smuggled Bacon Jam from Carl Allchin and tweeting it to the big screen, but most of all just hanging out and having fun with everyone, especially these two 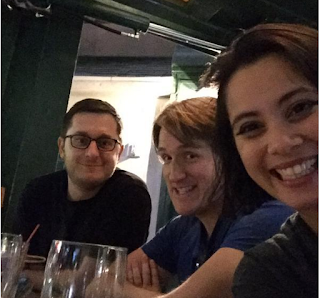 The NBA season is almost upon us once again, and that also means that Fantasy Basketball will be starting up soon too. Last year I was in the league managed by Ben Jones of Tableau and http://dataremixed.com/ fame. I did pretty well, but I was really scrambling on draft night.

One thing I didn't really appreciate last year was how important winning the different categories is, especially the ones that don't get so much attention. For example in fantasy hoops blocks have as much clout as points, and so choosing less well known players who are strong blockers can be as legitimate a strategy as going for the big scorers.

This year, to try and help my draft approach I have come up with my Fantasy Hoops Draft Assistant in Tableau. This takes last years data and compares each player to the league average across all the categories, individually and combined to a total. Here it is:


Whatever your strategy - whether selecting all-rounders or targeting specific categories, this tool should help you prepare for the draft and respond as picks are made.

The scores work like this, using points as the example:

As you can see, Level of Detail calculations come in handy here!

The FT% and FG% are slightly different. I weighted them by the number of shots taken adjusted the scores by a factor of 100 to fit along with the rest:

I also added a minimum requirement of 500 minutes played as a context filter.

Waiver: Last seasons performance is no guarantee of success this year - so please don't blame me if you use this tool and lose your league.....

Tableau Tip - Comparing a custom date range with the prior year

Here's a quick tip based on a problem that I solved with a colleague this week. Take the following scenario:

Here's how we solved it:

To see the sum of sales for the current custom period, use parameters - one for start date and one for end date. In our case all data was registered at month start and we were doing months only. Because of this we didn't want to see the calendar appear so we used a list of dates created in Excel and copy and pasted in to the parameter. Example using Superstore Sales below, note US date format: 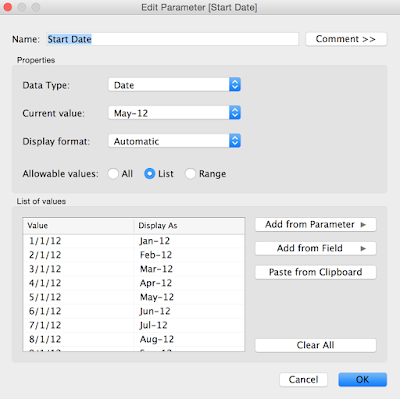 And then duplicate the 'Start Date' parameter and name it 'End Date'.

Now what I often like to do when I want to bring back data that meets a certain criteria (in this case fit a date range, but could be 'is within a region' etc...) is create a calculated field that returns the value if the criteria is met and 0 if its not met. This means it can still be aggregated however you like and you don't have to worry about the potential conflict or impact of filtering. So in this case we wrote the following calculated field for the current period sales

Notice how the IF statement is completely inside the aggregation - that's something you can use in many situations including much more complicated calculations. And again in our example, all data was at month level.

Now how about the prior period, one year back? Well because the periods can overlap and can be any period we can't use one of the standard table calculations, at least I don't think so. So we made use of the DATEADD function with a value of 1 to offset the order date by a year, so that we pick up prior data. Like so 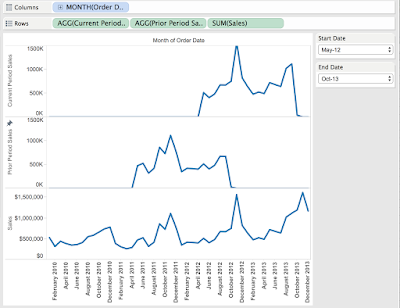 And now we can very easily do comparative calculations of current period versus prior period, for example to see % growth across categories 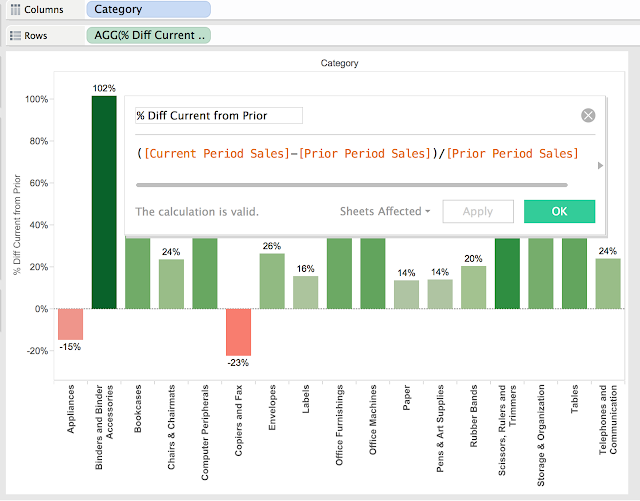 hope you find that useful.

I'm very honoured to have been named a Tableau Zen Master again this year and be among such an impressive group of people - thank you Tableau! 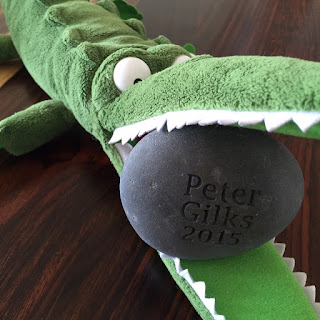