When I was studying Statistics at University one of my favourite topics was Markov Chains and how they could be applied to real life situations. I was particularly fascinated by the simple Random Walk which to borrow from Wikipedia is "a mathematical formalisation of a path that consists of a succession of random steps".

What fascinated me was that random walks don't just fluctuate around an average, they usually 'go' somewhere. And there are so many possibilities of where they will go. Take this example:

Starting at point zero on a simple x,y axis for every move along x of 1, move along the y axis with a randomly chosen value of +1 or -1. You might think that all such 'walks' would just end up around the zero line, but they don't. Again borrowing from Wikipedia, here's what a bunch of such Random Walks end up looking like: 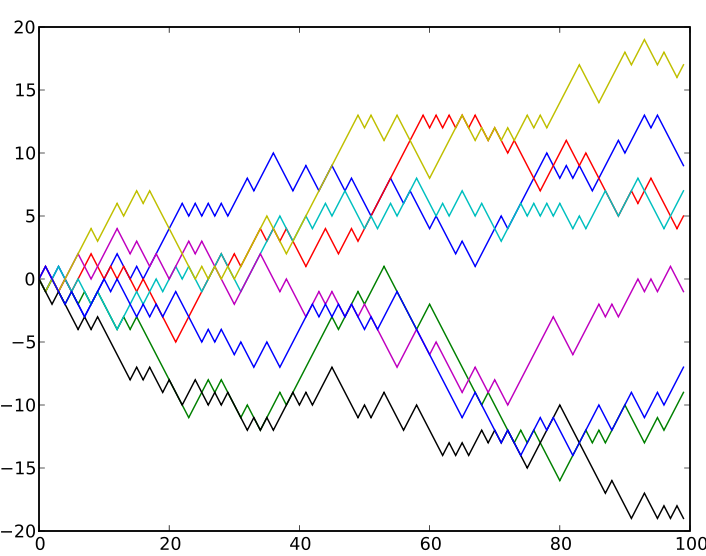 Anyway, the reason I mention this is because I've always had the rather geeky desire to do my own random walk, and by this I mean an actual physical walk - going for a stroll but letting chance determine my route. And this month, thanks to Tableau Public's Quantified Self Month, I finally got the kick I needed to actually go and do it. Plus now I live in a city built around a massive grid, where walking anywhere can be done in any number of combinations of streets and avenues, I had no excuse not to. Then of course I had to visualise the results in Tableau:


So how did I actually go about it? Well first off I need to give massive props to my wife Heather for doing this with me, helping come up with the plan and doing all the photo and photoshop work for the viz. Here's what we did:

- We decided on a few rules
1. We would start the random walk close to home, at the intersection of Avenue B and 11th St.
2. We would roll a di (actually an iphone app called Dice Roller) and take the following actions:
- Roll 1 or 2: Turn left and walk one block
- Roll 3 or 4: Go straight ahead and walk one block
- Roll 5 or 6: Turn right and walk one block
3. We were not allowed to go down the same block twice (to keep us sane)
4. If an intersection has less than 3 options, split the probability equally.
5. Walk for exactly 100 blocks and see where we end up

Here we are at the start: 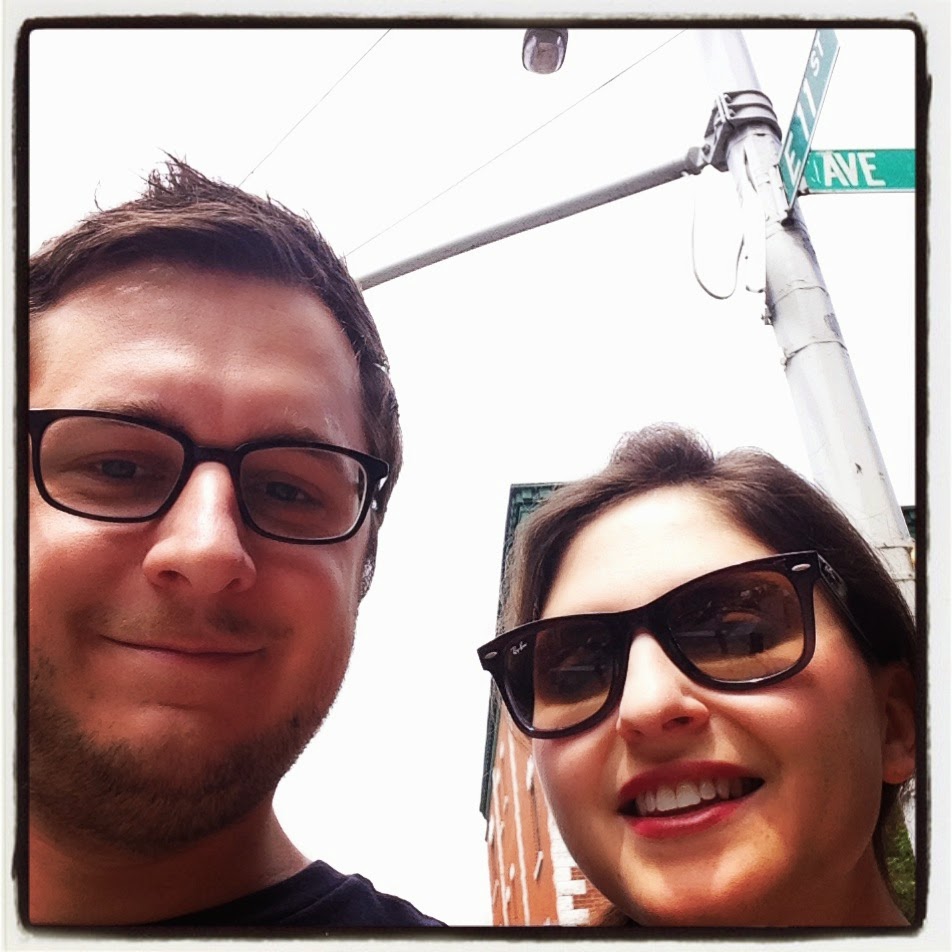 Then we walked! And along the way we recorded a few of the things that we passed in order to give a flavour of the streets we were going down and how they differ. The, fairly random, list of things we recorded were:
- Bars (just bars, restaurants with bars didn't count)
- Laundries and dry cleaners
- Independent coffee shops
- Big chain coffee shops
- Street art (loosely defined)
- Pizza shops
- Bodegas and delis

In retrospect I wish we'd recorded the number of psychics, because we definitely passed a lot of them! In order to record everything we passed, the street names and the results of the di throws we used the latest in data collection technology: 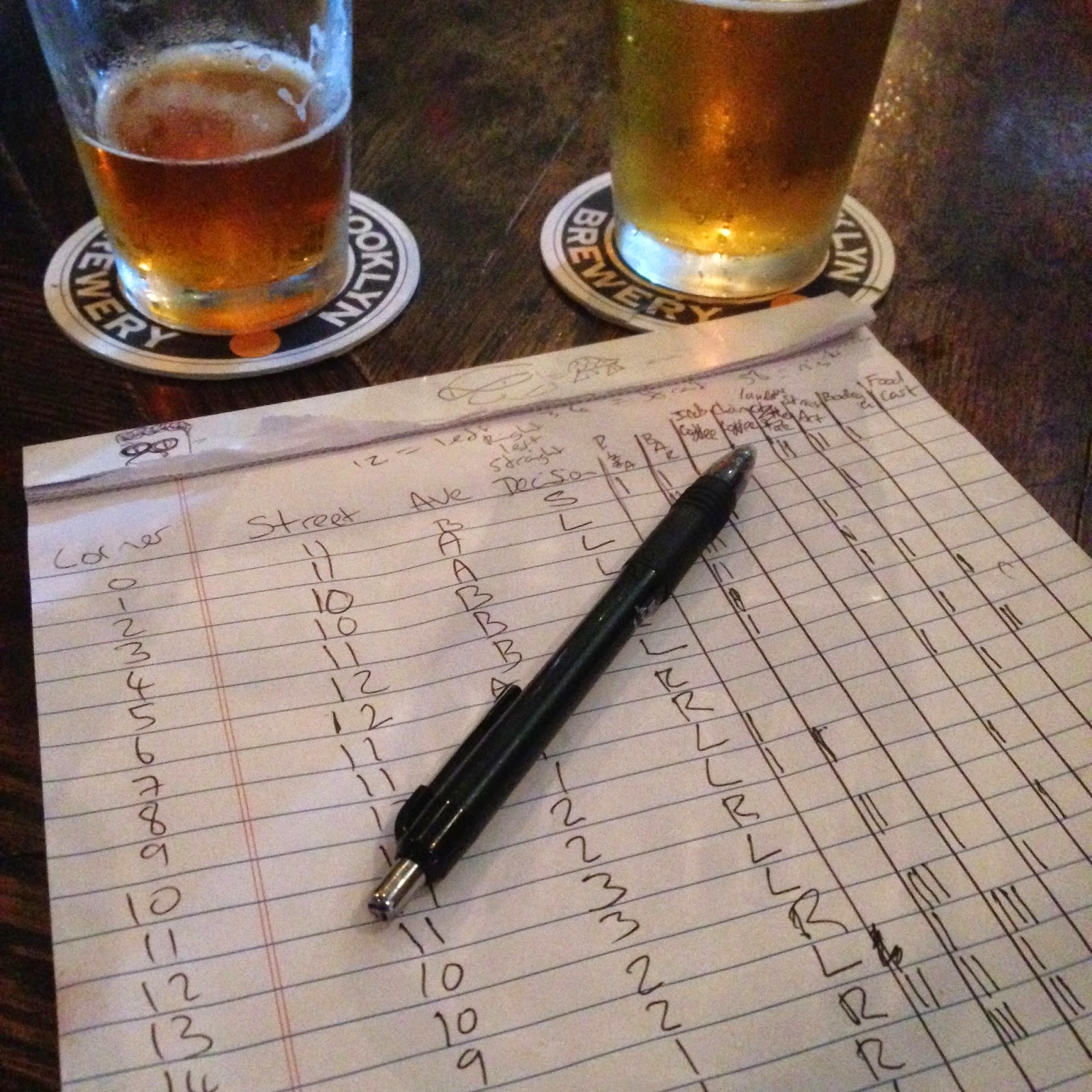 Heather also took a photo of every intersection and a photo of something on the block, which you can see in the viz.

Well the whole thing took a whopping six and a half hours, including a few rest stops for bagels, beer and pizza. And we also saw a surprise street market, the Hells Angels club house and a bit of a rain storm. But I was impressed with how far we travelled, we certainly took the long route but we ended up going completely East to West across Manhattan before basically going round and round in circles in the West Village (one part of Manhattan where the grid goes a bit skewy). I'm pretty happy with the results, it was a long day but worth it. Its an interesting way to discover your city and takes you down streets you may never otherwise go down.

Oh, and we took a taxi home. 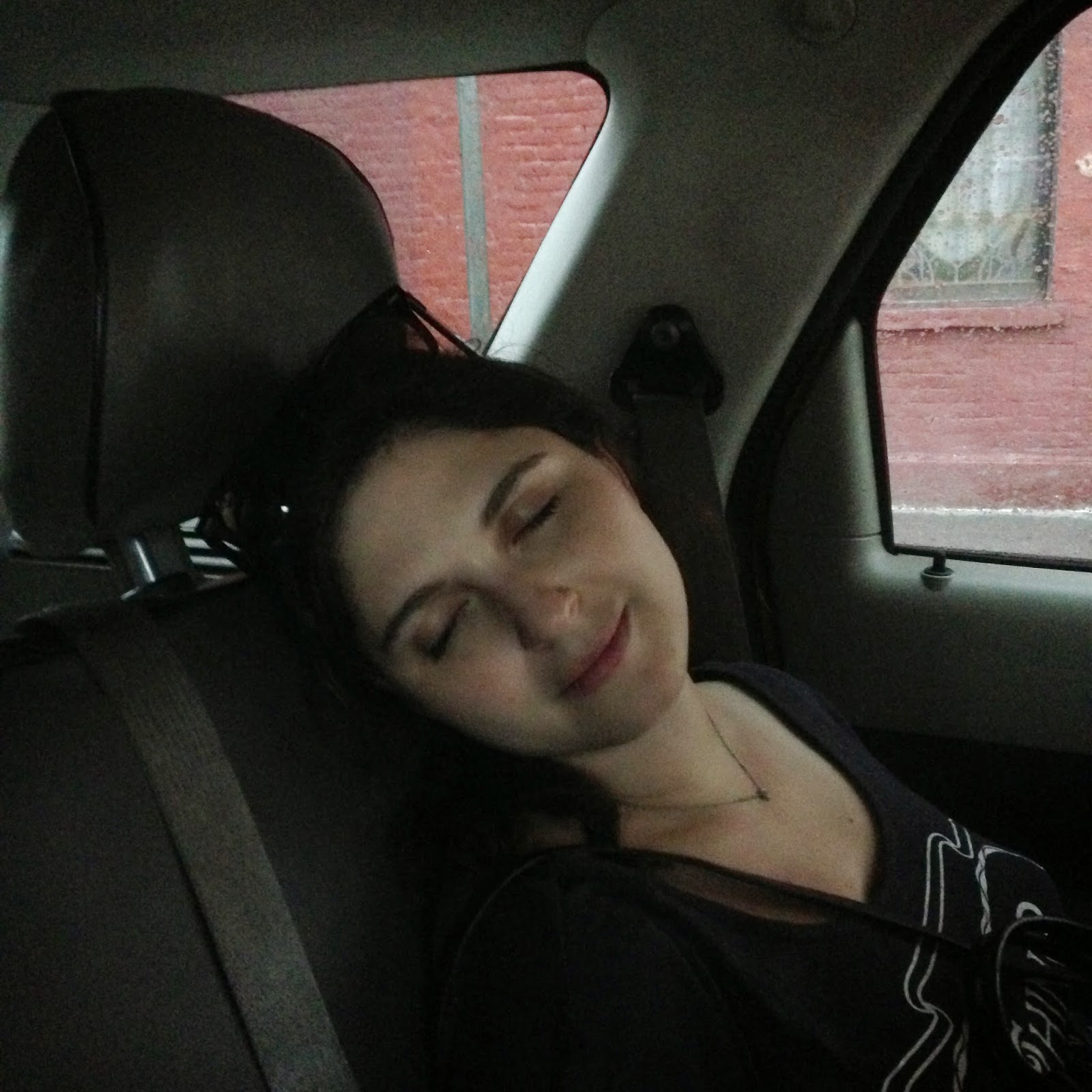