When I first published the Tableau Viz below (DreamForce Tweets) it was heavily loaded with a font I liked that was pre-installed on my Windows 8 work PC called 'Script MT'. It looked like this:

And when I published the viz to Tableau Public, at first everything seemed fine. But I later realised that I was facing the familiar Tableau Public curse of your beautifully selected font not being compliant and so when viewed from other computers the font was reverting to Arial. I've had this happen to me many times before so decided to find out which fonts I CAN use.

This led me to this article http://kb.tableausoftware.com/articles/knowledgebase/resolving-font-discrepancy which states that because Tableau Public servers are installed on Windows 2008, only fonts that come packaged with Windows 2008 will work. So I picked one off this list http://www.microsoft.com/typography/fonts/product.aspx?PID=160 called Segoe Print. When I re-published my viz with this font everything at first seemed fine, and I checked on a different PC to double check. However I then loaded it up on my macbook: 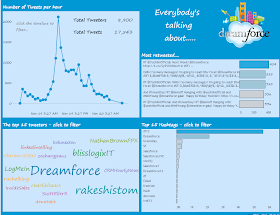 As you can see its not looking good on the Mac. And in both cases I'm viewing through Chrome. So I had a look for a list of fonts available on Mac and found this list http://en.wikipedia.org/wiki/List_of_typefaces_included_with_OS_X

So apologies if you are viewing my DreamForce viz on a Mac, its going to look a bit less exciting.

What I have learned? Well when publishing a viz on Tableau Public, the only way to be sure your fonts will render properly on all devices is to select from a very short (and boring) list of fonts like Arial, Veranda, Tahoma etc... Or be prepared to write everything out in Powerpoint and import words as picture files.

I think this is a real shame as Tableau allows so much freedom and creativity in so many ways - it would be nice if we could furnish our vizes with the fonts to match. I think there must be a way around this issue, and hope it is tackled at some point in future releases.

NB - Its worth noting this issue is only with Tableau Public, for a Tableau Server instance this is easily resolved by installing fonts onto the server machine.